Louisiana Governor John Edwards has declared a state of emergency after a wave of ransomware attacks targeted school districts this month. This Emergency Declaration will allow Louisiana state resources and cybersecurity experts to assist local governments in securing their networks.

In July alone, school districts in Morehouse, Sabine, Monroe City, and Ouachita were infected with ransomware that caused disruption to their computer systems and phone systems.

"The cybersecurity incident has already impacted school systems in Sabine, Morehouse, and Ouachita parishes in North Louisiana," stated a press release by the Louisiana Office of the Governor. "The state is in contact with parish school systems and governments across the state to assess further areas that may be at risk."

The statewide Emergency Declaration 115 JBE 2019 allows cybersecurity experts from state agencies such as the Louisiana National Guard, Louisiana State Police, and the the Office of Technology Services to assist local governments.

It also restricts companies from inflating their prices during the emergency. This is to prevent IT support and security consulting companies from taking advantage of ransomware attacks hitting the schools.

Finally, the declaration requires all government agencies who are affected by a ransomware attack to report it to state officials so that there is a coordinated response.

"Any departments, commissions, boards, agencies and officers of the state, or any political subdivision thereof, that may be affected by this cybersecurity emergency are directed to work with state officials to ensure there is a coordinated response to this event and are further directed to comply with the requirements of the Database Security reach Notification Law, La. R.S. 51:3071 et sq.

School districts hit with a wave of ransomware attacks

In July, four different Louisiana school districts were hit with ransomware attacks that created disruption in their school's IT systems. While not much is known about the Ouachita school district attack, Monroe City, Morehouse, and Sabine issued alerts about their ransomware incidents.

The Monroe City school district was infected by ransomware on July 8th that caused a disruption in their computer systems.

Attention!
On July 8, 2019, the Monroe City School System experienced a disruption to its computer systems. We immediately notified our Information Technology service providers and retained independent, third-party cybersecurity experts to investigate this matter.

While there are problems with system connectivity, we have no reason to believe there is any public safety issue.  We also have no indication that there was any unauthorized access of sensitive or private information.  We also believe that full connectivity will be restored in the near future.

We have notified law enforcement and are cooperating with authorities to assist their investigation.  That investigation is ongoing.

Sabine Parish school district's attack was on July 21st and disabled some of their computer and phone systems.

The Sabine Parish School System was hit with an electronic virus early Sunday morning. This virus has disabled some of our technology systems and our central office phone system.

The district staff reported this electronic viral attack to local law enforcement, state officials and the FBI. All available resources are being utilized to get the district systems back on line. An investigation involving local, state and federal law enforcement is ongoing at this time.

The school phone systems were not affected by this attack. The central office phone system is being repaired and service will be restored as soon as possible.

According to the Louisiana Department of Education, several other school districts were attacked by the same virus this week

This week Morehouse Parish school district posted an announcement to their Facebook page explaining that the ransomware attack did not cause major disruption on their network. 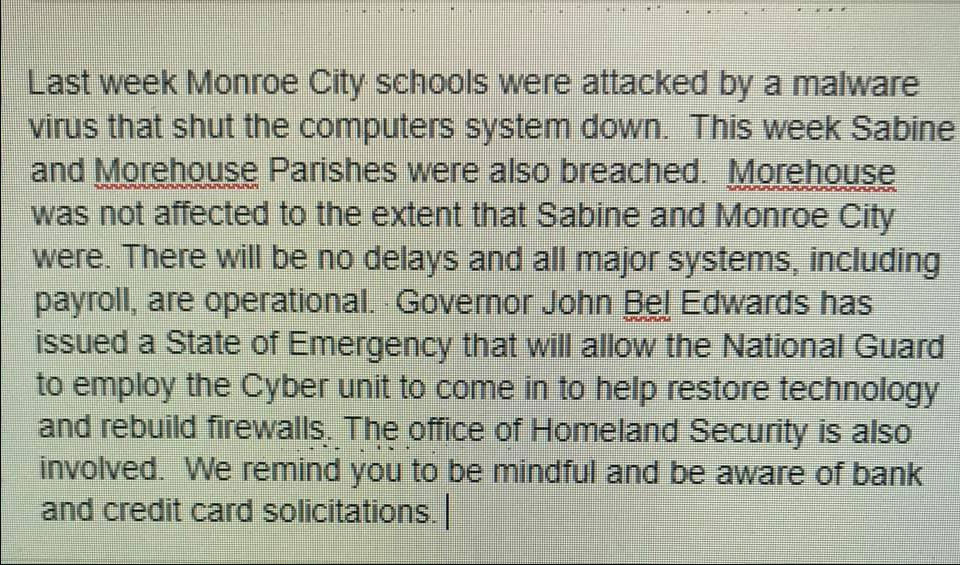 In 2017, Gov. Edwards established the Louisiana Cybersecurity Commission that consists of law enforcement, state cybersecurity professionals in the public and private sectors, academia, and stakeholders.

This commission is designed to offer a coordinated response to cybersecurity events and to identify and mitigate cybersecurity risks to Louisiana. This includes creating solutions that better protect their infrastructure and computer systems.

This Emergency Declarataion is the first activation of the emergency support functions established by this commission.